A large manufacturer of sporting goods became concerned about inconsistencies in the test results from an existing Chatillon testing system used for quality control. The variability of results showed the inability to maintain tight tolerances on manufacturing processes, which resulted in increased rework, retest, scrap, and cost. This prompted a GR&R study to compare the variability of the Chatillon to a comparable Instron Model 3365.

There are multiple sources for variability in test results from a mechanical testing system, such as load cell repeatability, and test speed consistency. Sources of variability also go beyond the testing machine to include operator technique, specimen variability, and ﬁxture tolerances. Thus, every effort was made to eliminate non-machine variables in order to produce only machine-related issues.

In order to highlight only machine-related variability, a simple compression test was designed with a coil spring. This test required only one operator, testing only one spring, with identical test conditions: compress the spring to 1,825 N and return, and then measure the peak force.

Nine consecutive tests were run on both systems and the peak forces were recorded. In the graphs below, note the variability in the peak force recorded on the Instron (2 N) vs. the Chatillon  (12 N). The implication is clear: by reducing the variability by a factor of six, this large manufacturer would be able to control output quality to much tighter tolerances, thereby reducing cost and scrap/retest, increasing output capacity, and improving laboratory efficiency. 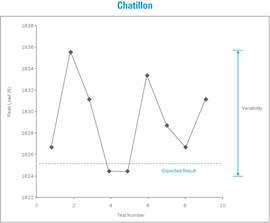 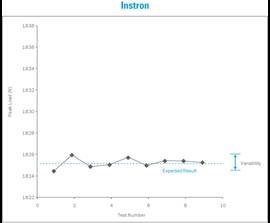