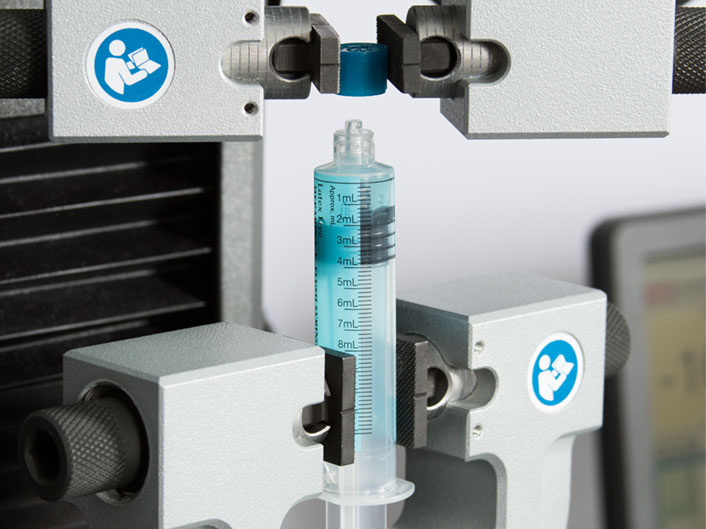 Conical Luer fittings are commonly used in medical devices, such as syringes, hypodermic needles, and catheters, to achieve a leak-free connections between medical devices.

Luer fittings can be a Luer slip or a Luer lock. A Luer slip is a tapered cone that connects to a tapered cavity. A Luer lock contains a Luer slip fitting with threads that can be connected.

There are four tests in ISO 594 that are applicable to mechanical testing:

1. Luer Assembly: Ensures that the Luer specimen can be assembled with minimum axial force and torque.

2. Separation Force: Ensures that the Luer specimen remains attached to the reference fitting when an axial load is applied.

3. Unscrewing Torque: Ensures that the specimen Luer remains attached under a specific unscrewing torque in the counterclockwise direction.

4. Resistance to Overriding: Ensures that the threads cannot be overridden by a specific screwing torque in the assembly clockwise direction.

An Electromechanical system with a torsion add-on can be used to perform these tests. The torsion add-on can be added to any 5900 single column testing machine to add rotational capabilities. The system operates on Instron’s Bluehill® 3 Software with TestProfiler. Bluehill 3 is able to performed closed-loop control for axial testing and measures axial displacement, rotary displacement, axial load and torque. A biaxial Dynacell load cell is mounted to the base of the machine. Advanced screw action grips are used to grip the product. A slight axial load can be placed on the bottle cap to push it down before rotation begins.

The Instron Torsion Add-On 3.0 for Electromechanical Universal Testing Systems is designed for simple, simultaneous axial and torsional testing of devices and/or components. Torsion Add-On 3.0 easily mounts to any new or existing Instron 6800 or 5900 system, adding torsion capability to your lab while saving valuable lab space. It utilizes Bluehill Universal’s dedicated axial-torsion and method types in a user-friendly and intuitive interface.